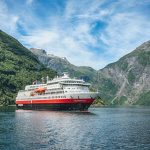 Lysefjord or Lysefjorden is a fjord located in the Ryfylke area in Rogaland county in southwestern Norway. The 42-kilometre long fjord lies in the municipalities of Strand and Sandnes, about 25 kilometres east of the city of Stavanger

Fjærland or Mundal is a village in Sogndal Municipality, at the end of the Fjærlandsfjorden, in Vestland county, Norway. The Fjærlandfjorden is a branch going north off the Sognefjorden, the longest fjord in Norway

There is further excitement today as the ship crosses the Arctic Circle. Sailing past the famed peaks of the dancing Seven Sisters mountain range, folklore merges with the facts of nature – look out for Torghatten, which still bears the hole made by Hestmannen’s arrow in one of Norway’s popular legends. The award-winning new museum at Rorvik celebrates the important part the sea has played in defining today’s Norway.

Træna is a municipality in Nordland county, Norway. It is part of the Helgeland traditional region. The administrative centre of the municipality is the island/village of Husøya. Other population centres include Selvær and Sanna. Fishing is the economic mainstay of Træna.

Tromsø’s numerous attractions include wildlife and impressive vistas, as well as history, culture and daring architecture. Often described as the Paris of the north, Tromsø offers a lively nightlife, friendly locals and a range of restaurants specializing in the fresh produce of the region. The city centre offers great shopping – from locally made specialties to Nordic and international brands.

Skarsvåg is a village in Nordkapp Municipality in Troms og Finnmark county, Norway. The village lies along the northern coast of the island of Magerøya, and it claims the distinction of being the world’s northernmost fishing village. The local fishing fleet primarily fishes for cod in the waters north of Magerøya.

Reine is the administrative centre of Moskenes Municipality in Nordland county, Norway. The fishing village is located on the island of Moskenesøya in the Lofoten archipelago, above the Arctic Circle, about 300 kilometres southwest of the town of Tromsø

Brønnøysund is situated on a narrow peninsula on the mainland, surrounded by islands and water. Here, you’re actually half way on the long northbound stretch of land that is Norway. The small coastal town of 5,000 inhabitants is centred on the narrow, but strategically situated harbour, which caters for all trade and fishing. It is a vibrant and pretty little town with an attractive visitors‘ marina. Use some time to stroll around the streets – perhaps a walk along Havnegata, where you can enjoy looking at the small boats and bustling life of the archipelago. Sample the street life and go into one of the pubs, or treat yourself to a delicious meal at one of the restaurants.

Ålesund is mostly known for its unique Art Nouveau architecture, which was in fact the result of a disaster. In 1904, the larger part of Ålesund was destroyed in a devastating fire. In an act of excellent foresight, it was decided to rebuild the town entirely in Art Nouveau, the fashionable style of the time. Most of this beauty has been preserved. If you look up as you explore the town, you will be enchanted by the rounded towers, sinuous lines and foliate forms typical of Art Nouveau.

Rosendal is the administrative centre of the municipality of Kvinnherad in Vestland county, Norway. The village is located on the southern shore of the Hardangerfjorden, about 4 kilometres north of the ..